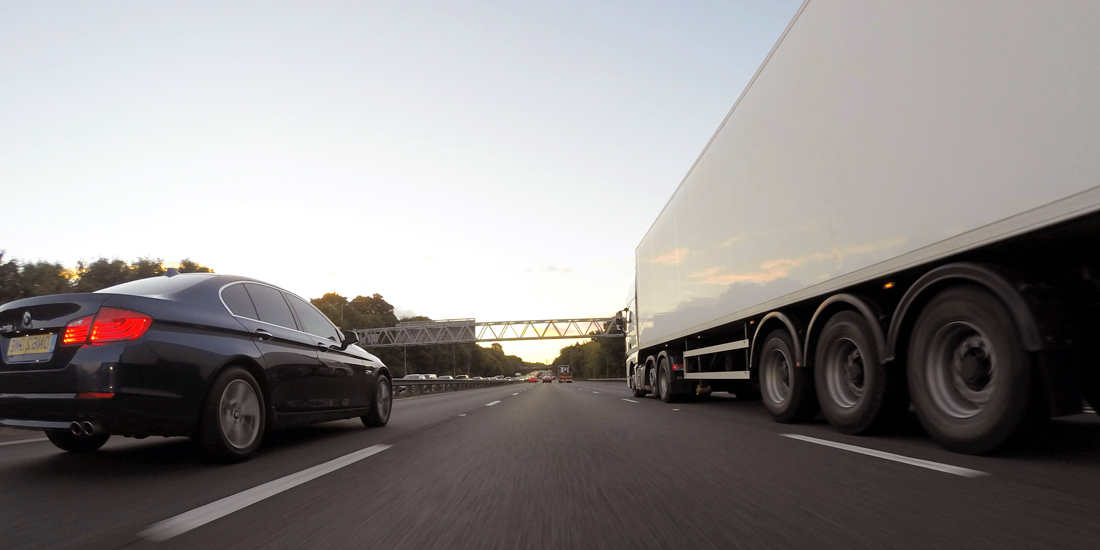 DMV Questions about Sharing the Road with Trucks

On the written test for your driver’s license you will probably see one or two questions about sharing the road with a truck.

Many studies have shown that new drivers are unaware of the limitations and capabilities of large trucks. The larger the truck the more room it needs to maneuver and stop.

Therefore you need to pay some extra attention to this chapter in your manual.

What is generally true about large trucks?

A. They need less room to maneuver
B. They have longer stopping distances
C. They have smaller blind spots

Trucks have longer stopping distances than most cars. The heavier the vehicle is, the longer it takes to stop.

Never try to cut in front of a large truck. A large truck may need twice the distance to stop compared to a car or a motorcycle, especially when roads are wet or icy.

Under ideal conditions, a heavy truck with good tires and good brakes traveling at 55 mph needs a minimum of 335 feet before coming to a complete stop.

Questions about a Truck’s Blind Spots

Questions about a truck’s blind spots are also popular on written tests.

The blind spots exist on both sides, rear, and front of the large vehicle.

To the rear long trucks can have a large blind spot that reaches up to 200 feet directly behind them. Therefore you should always stay well back when follow a truck, it helps the driver to know you are there and will give you a better view of the road ahead.

If you follow too closely and the truck brakes or stops suddenly, you have no place to go and could run into the truck. To prevent this, you need stay back and pay close attention when following large vehicles.

On the left side there is a blind spot that runs from behind the cab to just behind the driver.

On the right side there is also a blind spot and it is even larger than the one on the left side.

Trucks with high hoods can have a blind spot of up to 25 feet in front of the truck and one that stretches over to the right side.

Handbooks or manuals in some states will say something like this about blind spots:

If you can’t see the truck’s mirrors, the truck driver can’t see you.

Some go even further to say:

If you can’t see the truck driver’s face in his mirrors, the driver can’t see you.

In the 90s, The Federal Highway Administration (FHWA) introduced its national public service highway safety campaign on sharing the road safely with commercial vehicles. It became known as the “No-Zone” campaign.

The No-Zone represents the danger areas around trucks and buses where crashes are more likely to occur. Some No-Zones are actual blind spots in which a vehicle “disappears” from the view of the driver, and the terms blind spots and No-Zones are often used interchangeable.

Don’t Squeeze Past a Truck Making a Right Turn

Pay close attention to large vehicles turn signals and give them plenty of room to maneuver. When truck drivers are planning to make a right turn, they will sometimes swing wide to the left to safely turn right and clear the corner of a curb or other obstruction. Sometimes space from other lanes is used to clear the corner.

This may fool you into thinking that there is plenty of room to complete your own turn on the inside. But if you try to pass between the truck and the curb, you can be squeezed in between them and could suffer a serious crash. To avoid a crash, stay behind and do turn until the truck has completed its turn.

The reason a truck swings left before making a right turn at an is that the rear wheels will follow a shorter path than the front wheels.

Who is Most Likely at Fault in a Collision?

A study conducted by the AAA Foundation found that in collisions involving cars and trucks, the driver of the car was at fault 73 % of the time.

Other studies have shown that:

Many collisions with large vehicles occur at intersections because the driver of a passenger vehicle is unable to accurately judge the speed of an approaching truck.

When you are in doubt about the speed of an oncoming truck or bus, do not turn left in its path. The truck or bus may be going faster than you think and they will take longer to stop than a car.

This is also why you shouldn’t cut off a large vehicle in traffic or on the highway to reach an exit or turn or to beat a truck into a single-lane construction zone. The truck driver may not see you and will take longer to reduce speed.

More DMV Questions about Sharing the Road with Trucks

Study this part in your driver’s manual before the real test. Or take some extra practice tests for your state!

#1. Generally speaking, you are in a large trucks blind spot if you:

If you cannot see the truck driver in the side mirror, then they may not see you.

#2. Truck drivers often keep an extra space cushion in front of the truck. What is this extra space is needed for?

Drivers of large vehicles try to keep a safety cushion of space around them. The need that cushion to maneuver their vehicle and to stop safely.

Do not drive into the space immediately surrounding a large vehicle. Do not pull in front of a large vehicle and slow down or stop suddenly. The driver will have too little room to stop and will crash into you or may risk jackknifing by trying to stop suddenly at highway speeds

#3. When you see a truck preparing for a right turn ahead, you should:

Large vehicles make wide turns, and sometimes they must move to the left before making a wide turn to the right. If you are next to a truck or bus, you are probably in a blind spot. Watch for possible right-hand turns, and stay safely behind until you know what the driver is doing.

#4. Trucks, tractor-trailers, and buses have:

Large vehicles have much larger blind spots than most cars.

#5. When a vehicle makes a turn, the front wheels take:

When any vehicle makes a turn, the rear wheels follow a shorter path than the front wheels. The longer the vehicle, the greater the difference.

#6. Areas around a large truck where other vehicles may disappear into blind spots are located:

Blind spots are on the sides, rear and front of the large vehicle.

#7. A large truck is driving in a center lane. If you want to pass the truck, it is best to pass:

Do not pass a truck or bus on the right side, unless it is necessary. Always try to pass on the left and remember that it takes longer to pass a tractor-trailer or truck. Try to get through the No-Zone as quickly as possible, never linger in the blind spot. As long as you are driving next to a truck or bus, you are probably in a blind spot.

#8. Because of its size, a large truck often appears to be traveling faster than it is.

Because of its large size, a tractor-trailer often appears to be traveling at a slower speed than it is. A substantial number of car-truck collisions take place at intersections because the driver of the car does not realize how close the truck is or how quickly it is approaching.

DMV Practice Questions for Your State

3 Comments on Top 10 Questions – Sharing the Road with Trucks