Great! You reached the passing score on the road rules part. Do you want to try again?

or do you want to try the road sign quiz?

This is not passing score on the road rules part. Do you want to try again?

or do you want to try the road sign quiz? 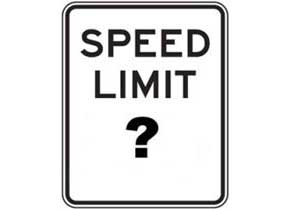 #1. Unless it is posted otherwise, what is the basic speed limit on state routes or through highways except controlled-access highways within municipal corporations outside business districts?

The basic speed limit is 35 mph on all state routes or through highways except controlled-access highways within municipal corporations outside business districts. 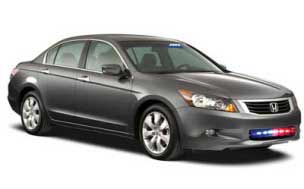 #2. Red or blue lights showing toward the front of your private car are allowed:

No vehicle shall be equipped with a light of any color other than white or amber mounted on the front (except those operating under special permits, public safety vehicles, emergency vehicles, disabled vehicles, funeral escort vehicles and road repair equipment). 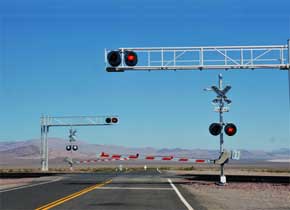 #3. Driving around a lowered gate at a railroad crossing is:

Never drive around a lowered gate. It is illegal and deadly. 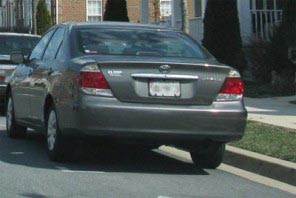 #4. When parking parallel to a curb you must park:

A vehicle must be parked facing the direction of traffic on that side of the street, parallel to and not more than 12 inches from the right curb. 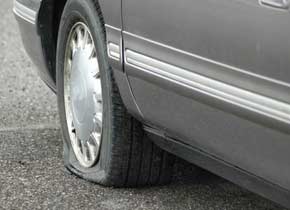 #5. If you have a tire blowout while driving, it can be dangerous to:

A blowout when traveling at a high rate of speed is dangerous, especially if the driver does not realize it. Follow these tips for a safe recovery:

Remember, do not overreact. Do not steer sharply off the road. 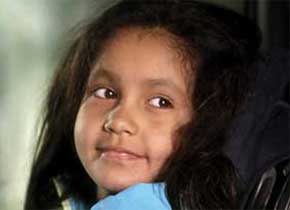 #6. Which is a suitable restraint system for children who are four through eight years old?

When any child who is at least 4 years of age but less than 8 years of age is being transported in a motor vehicle, the operator of the vehicle shall have the child properly restrained in a booster seat unless the child is four feet and nine inches or taller. 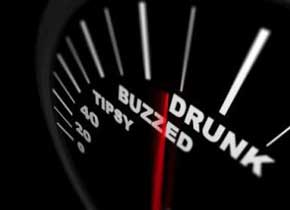 #7. What is the best advice to a driver who has taken too many drinks?

Some myths about drinking alcohol say that taking cold showers, drinking black coffee, or exercising will sober a person up. This is not true.

A person that had too much to drink must not drive. If possible, he or she should ask somebody who has not been drinking to drive instead. 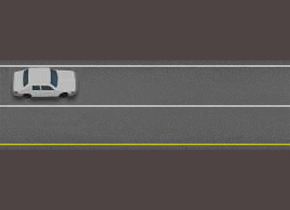 #8. If you find yourself on a roadway marked with a yellow line on the right edge and a white line to your left:

If you find yourself with yellow to your right and white to your left, you are going the wrong way.

Remember, yellow lines are also used for left edge lines on one-way roadways. White lines are used as right edge lines on roadways and to delineate the separation of traffic flow in the same direction. 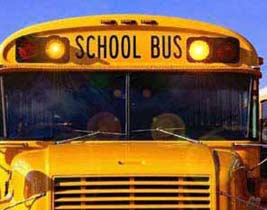 #9. When a school bus activates flashing amber lights, it tells you that:

When a school bus driver is preparing to stop the bus, he or she activates four amber lights, two on the front and two on the rear of the bus. These lights continue to flash until the bus is fully stopped. 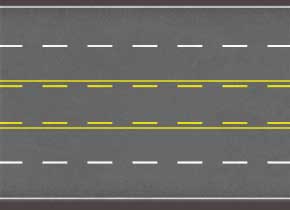 #10. A center lane with yellow pavement markings on both sides is:

If both sides of the center lane are marked by a solid yellow line and a broken yellow line, drivers traveling in either direction may use the lane for making left turns. The lane must not be used for passing. It may be entered only to make the turning movement. Vehicles from either direction may use the lane immediately prior to making a left turn. 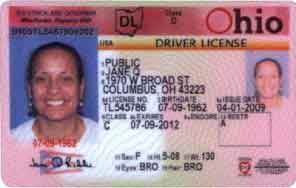 #11. Which classified driver's license allows you to drive a school bus with a gross vehicle weight rating of 26,000 pounds or less?

A Class C license is required for any school bus with a gross vehicle weight rating of less than 26,001 pounds that is designed to transport fewer than 16 passengers including the driver. 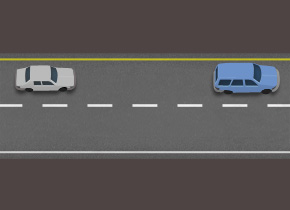 #12. When traveling at 50 mph under ideal conditions, one rule of thumb for safe following distances is to keep back:

A driver must maintain sufficient distance between his or her vehicle and the vehicle ahead. Some safety experts advise drivers to allow one car length ahead for each 10 mph of speed. Others suggest following the three-second rule. To use a three-second rule, you should watch the vehicle ahead pass a stationary object, such as a lamppost, counting ne thousand one, one thousand two, one thousand three. If you pass the lamppost before you say three, you are following too closely and should slow your speed. In bad weather, increase the space to four- or five-seconds traveling time. 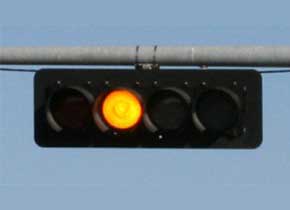 A steady yellow traffic light means caution. The red stop signal will be exhibited immediately after the yellow light appears. Adjust speed to come to a smooth stop.

Remember, stop if it is safe to do so. Do not speed up to beat the light. 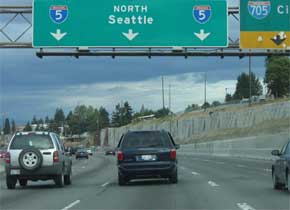 #14. To back up on an interstate highway:

If you miss your exit, take the next one. It is illegal to stop, to back or to drive into the median, or cross over on an interstate highway. 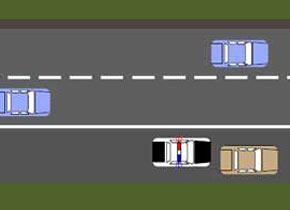 #15. When approaching a stationary emergency vehicle with flashing lights on an interstate with multiple lanes, you must: 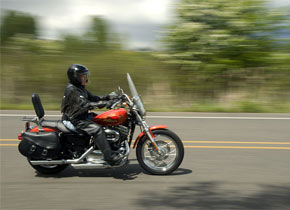 Remember, a motorist must not attempt to share the same lane beside a motorcyclist. Motorcycles need a full lane width like other vehicles. A skilled motorcyclist will constantly change positions within a lane to increase their ability to see and be seen, and to avoid objects on the road. Never move into the same lane with a motorcycle, even if the lane is wide and the cyclist is riding to one side. Pass a motorcyclist only when it can be done safely. 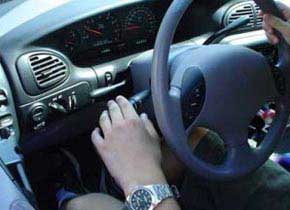 #17. When making a right turn, you should do all the following except:

You should not insist on the right-of-way.

A turn signal must be given at least 100 feet before the intended turn. Drive as close as possible to the right-hand curb or edge of the road. Yield to pedestrians.

(This question asked what you should not do). 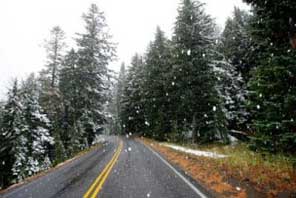 #18. When driving on a slippery surface such as snow or ice, you should:

Reduce your speed. Allow extra space between your car and the car ahead. Do not brake or turn suddenly. Use a low gear when going down steep hills. Be careful on bridges and overpasses. These areas freeze first and dry out last. 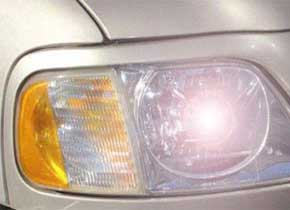 #19. When must you use your headlights?

Lights must be displayed: 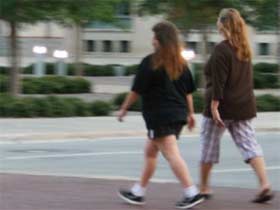 #20. A pedestrian has entered a crosswalk where there are no signs or signals. Who should be given the right-of-way?

This practice test has 20 questions about rules of the road, safe driving techniques, and Ohio traffic laws as described in the Ohio BMV study guide (“Digest of Ohio Motor Vehicle Laws”) .

The official BMV test has 40 questions and the passing score is 75%. You must get 15 road signs right and 15 of the road rules questions (30 correct answers).

There is an allotted time of 25 minutes for each test taker. You must start your test at least one hour before closing time (end of the day or for lunch).

Should you fail the written knowledge test, you must wait at least until the next business day before you can take the test again. There is no limit on how many times you can re-take the knowledge test.

The road sign part of the written test is only available in English, but for the rest of the test you can chose one of these languages:

At the examiners discretion, you may also be allowed to take an English audio version of the test.

Ohio BMV does not record or release failure rates on the knowledge test. It is, however, estimated that about one out of four first-time test takers fail the exam. Questions about road rules are reported to be harder than questions about road signs.

The overall difficulty level is rated as “easy”.

At what age can I get a learner's permit in Ohio?

When you apply a first Ohio motor vehicle driver license or permit, you must be at least 15 years and six months.

What documents do I need when I apply for a driver's license in Ohio?

You must provide documents that prove your full legal name, birth date, Social Security number, citizenship or legal presence, and address in Ohio. If you are under 18 years, a parent or guardian must approve your application.

Can I take the Ohio knowledge test in Spanish?

Yes. The BMV knowledge test is available in Arabic, Chinese, English, French, Japanese, Russian, Somali, and Spanish. All other languages must use an interpreter.

Can I take the Ohio permit test from home?

No, Ohio BMV does not offer online testing from your home.

How long must I wait if I fail the Ohio written test?

You must wait until the next business day. There is no limit on how many times you can re-take the knowledge test.

Must I take a driver education course to get a driver's license in Ohio?

If you are under 18 years, you must complete a driver education class at a licensed driver training school. The class must include 24 hours of classroom or online instruction and 8 hours of driving time.

If you are 18 years or older, BMV does not require a completed driver education. 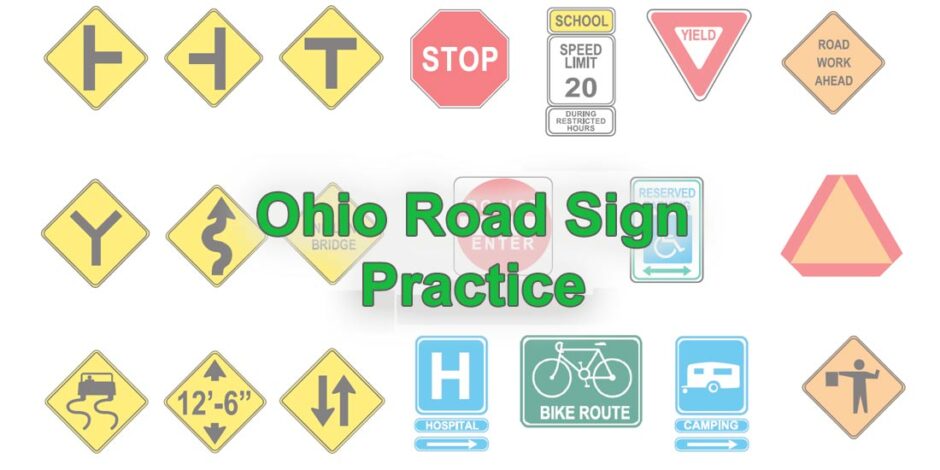